Facebook Twitter LinkedIn Tumblr Pinterest Reddit WhatsApp
Berlin – Samsung usually only release the Galaxy Note phablet of lines each year. However, in 2014 they released two Galaxy Note as well, that Note 4 and Note Edge. Significant changes occurred in the Galaxy Note Edge with the use of a curved screen on the right side of the handset.

But if compare with Note 3 and Note 4, at a glance it will look similar. What is the difference of the two phablet?

When viewed from the front, no significant differences were seen. The size of the two screens are both 5.7 inch, and use the same Super AMOLED panel. 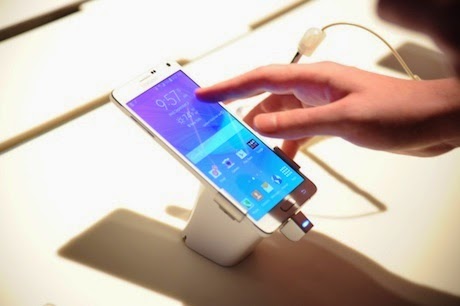 In terms of design, both on paper the difference is not too much. Note 3 and 4 use the same plastic casing cover soft touch textured skin. However, Samsung no longer uses accent stitching on the edges. In addition, Note 4 frame is made of metal materials such as Alpha Galaxy. Meanwhile Note 3, although his frame looks like metal, but is actually made ​​of plastic.

Samsung also buried a lot of new features in Note 4 Among other fingerprint sensors and heartbeat sensors. This feature is actually not really new, because before this feature is already available on other Samsung smartphones, the Galaxy S5.

In terms of camera, camera resolution higher than the Note 4 Note 3 That is 16 megapixels compared to 13 megapixels. Camera in Note 4 was already equipped with optical image stabilization (OIS). Heartbeat sensor which is located under the camera can be used as a shutter button.

For the front camera, the resolution in Note 3 only 2 megapixels, while in Note 4 increased to 3.7 megapixels. Not only the increased resolution, Samsung also puts wide lens in front of the camera.

While the innards, it is definitely spec Note 4 Note will be higher than 3 Samsung has always put in its time for the fastest processor the Galaxy Note series. Note 3 and Note 4 each have two variants of the processor.

Note 4 variants available in the 2.7 GHz quad-core processor and the octa-core 1.9 GHz. 4 core processor that is used comes from Qualcomm.

Note 3 while wearing a 800 quad-core Snapdragon processor 2.3 GHz. For octa-core variants use Exynos 5420 1.9 GHz speed. Offal faster it also assisted with the TouchWiz interface is cleaner, so should its performance will be better.