Facebook Twitter LinkedIn Tumblr Pinterest Reddit WhatsApp
Lenovo K3 Specification review (Lenovo Lemon K30-T) – After the release of its flagship product, the vendor Lenovo has now re-launched its latest product using code names Lenovo K3 or commonly called, “Lenovo Lemon K30-T”. Lenovo K3 Smartphone present use lemon yellow color as the name of the famous namely Lenovo Lemon K30-T. Lenovo’s new breakthrough from the vendor has a special meaning, perhaps by bringing a bright lemon yellow color as bright as the sun when it appeared his form. It will also bring its own brightness for Lenovo K3 smartphone which will lure many gadget lovers especially smartphones with the freshness of color that is brought as fresh fruit juice.

Lenovo K3 comes armed with a screen of 720 x 1280 pixels, equivalent to 5.0 inches (~ 294 ppi pixel density). With the wide screen smartphone will satisfy users because it has a clear and detailed screen or not flee if we see it as having a density of up to 294 ppi pixel color. Lenovo K3 supported type IPS capacitive touchscreen display that is capable of creating hingg 16 million colors. Lenovo K3 has a weight of 128 grams and dimensions of 141 x 70.5 x 7.9 mm (5:55 x 2.78 x 0:31 in). Lenovo K3 look so elegant use of color as well as the ideal body weight will also feel comfortable when you are at your fingertips. The screen on the Lenovo K3 already is multitouch but unfortunately not equipped by the screen protector, so you should be careful when operating the smartphone Lenovo K3 to avoid scratches.

The camera usually also be something that is very important for some people such as photographers. Lenovo K3 now present carrying 8 MP main camera resolution of 3264 x 2448 pixels, and supported a variety of interesting features including autofocus so that the camera can detect the focal point of the image to be targeted. LED flash to help the lighting when taking pictures or less lighting dim place. Geo-tagging know the time and location where the photo shoot in the capture, touch focus with touch focus feature you can set yourself the focal point of the target you want to take as you wish and face detection to detect faces that will be taken in order to face more obvious. The existence of interesting features on the Lenovo K3 smartphone, will help you when taking photos and photo quality will be able to have better results and satisfactory. Not only that Lenovo K3 smartphone than can be used for taking pictures, the smartphone you can use to record video. In addition to Lenovo K3 setting a 2 MP front camera. With the front camera of it will help you in the activity narcissistic video calls and take pictures using the front camera is a trend, now known as selfie photo.

Kitchen runway owned by Lenovo K3 already using the Android operating system from using version v4.4.2 or often we know Android KitKat. At Lenovo body K3 already planted chipset Qualcomm MSM8916 Snapdragon processor 410 and is run by a powerful current that is a quad-core 1.2 GHz with speed access to reach the Cortex-A53 is capable of generating code 32 bit and 64 bit. Lenovo K3 also been supported by the supporting graphics processor (GPU) of Adreno 306. Lenovo K3 is supported by some supporters of sensors including accelerometer, proximity and compass, it will help the system work more optimal Lenovo K3 smartphone. 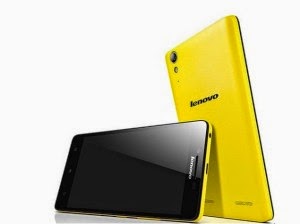 For storage of your data on the Lenovo K3 smartphone eg pictures, photos and video. Lenovo K3 is equipped with an internal memory of 16 GB and supported by 1 GB of RAM, if it is less you still can expand using a microSD external memory size up to a maximum capacity of 32 GB. With storage memory is very supportive, you no longer have to worry about storage space Lenovo K3.

Switching from dimensional display lets see network owned by Lenovo K3 Smartphone. Lenovo K3 already using Dual SIM (Micro-SIM, dual stand-by), which you can use to activate two sim in one phone, without having to keep changing smartphone. Lenovo K3 network is 2G GSM 900/1800/1900 – SIM 1 and SIM 2, TD-SCDMA 3G network and 4G TD-LTE network. Not only that, Lenovo K3 smartphone also been supported by GPRS and EDGE data network that has the speed of TD-SCDMA, TD-LTE. With the GPRS and EDGE network that you will still be able to access the Internet in the region which has not been completely untouched by the 3G network and 4G networks.

At Lenovo K3 already available Wi-Fi 802.11 a / b / g / n, dual-band, Wi-Fi Direct and Wi-Fi hotspots (Wi-Fi hotspot can use to share network access Internet only stayed enable wi- fi hotspots are available on the Lenovo smartphone K3). Wi-Fi has been able to use in places that now many hotspot areas provide free services such as cafe, restaurant or office. In addition, to facilitate your activities while transferring data between devices without having to connect to the Internet first. Lenovo K3 is equipped also bluetooth v4.0, A2DP, LE and USB microUSB v2.0 types.

Lenovo Smartphone GPS K3 has been providing services that can be connected to the service google maps app, so you can find out the travel route while traveling activity. The use of GPS with A-GPS, this service will greatly assist you when in place you’ve never visited before.

The battery is a smartphone and life support is very important to note. Lenovo Smartphone K3 uses Li-Ion batteries with the power of 2300 mAh battery. Using the carrying capacity of the battery so as well as the wide-screen Lenovo smartphone belonging K3 I think this is less balanced.