Sony Xperia M2 Aqua line of devices attached to the superior features waterproof and dustproof. This feature is implemented by Sony at all superior device, and most of the middle class. One middle-class Xperia phones from Sony that has the ability Xperia M2 is Aqua. This smart phone is none other than the Xperia M2, which features a waterproof and dustproof. With its IP68 certificate, Xperia M2 Aqua passes endurance test water for 30 minutes and at a depth of 1.5 meters. 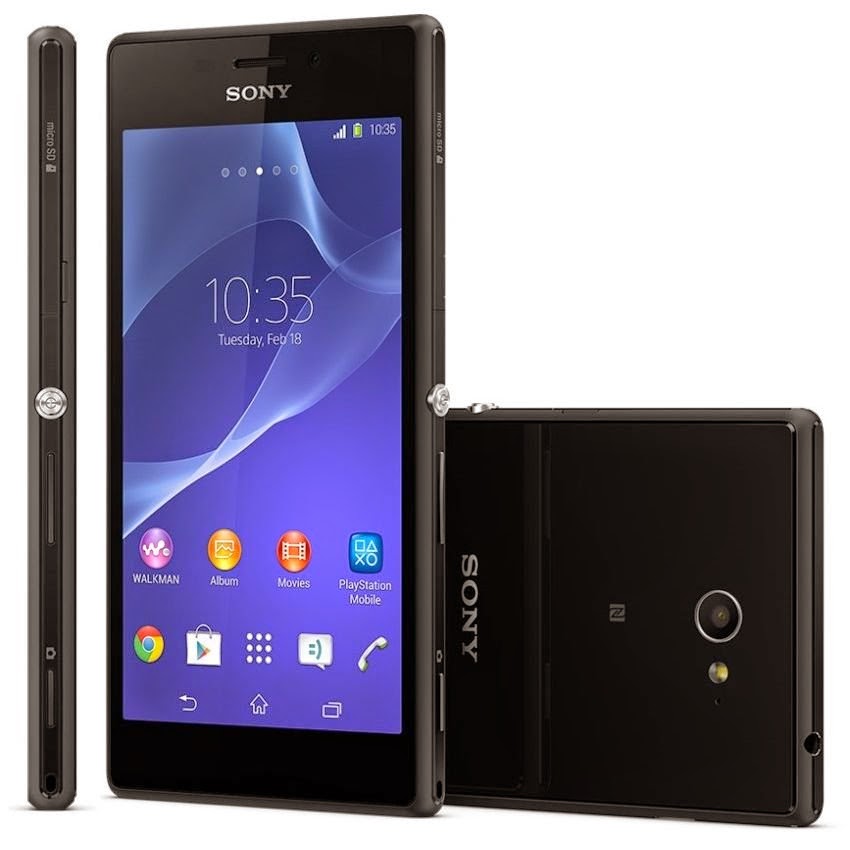 Most noticeably difference between M2 and Xperia Xperia M2 Aqua terms of body appearance is the back cover material. Xperia M2 Aqua no longer use slick shiny glossy plastic material, such as glass but opaque plastic. Because the more abrasive, Xperia M2 Aqua no longer slippery or easily degenerate. In addition, the texture is somewhat coarse distanced concerns scuffed or scratched easily. Because this phone has features waterproof and dustproof, microUSB port and a 3.5mm headphone jack had a door closing.

The screen used  Sony Xperia M2 Aqua IPS 4.8 inch QHD resolution, and protected Gorilla Glass 3. Earlier in M2 Dual use TFT display with the same resolution. IPS panel types are superior in terms of color reproduction and viewing angles are better than TFT. The resulting color output screen Xperia M2 Aqua looks good even when used at any time during the day.

Sony Xperia M2 Aqua interface is very familiar with the latest Xperia running Android 4.4 KitKat. Its lock screen page look the same, with the support of widgets and shortcuts to the camera application. Lock screen protection can be selected using several methods, such as face detection, pattern, PIN, or password.

The main camera is used Xperia M2 Aqua still the same as M2, i.e., 8MP autofocus camera with LED flash. In front artifacts secondary VGA resolution camera. In the camera application there are a number of features commonly found on the Xperia phone, Superior Auto, Manual, AR effects, Picture effect, Time shift burst, and so on. If no activity is any, the camera application will close by itself.

Features of the camera on the Xperia M2 Aqua regarded almost as much as the flagship Xperia phones. In the default application is also provided which helps Scene selection allows users to capture images. When the user wants to take pictures of landscapes, can be set to Scene Landscape capture mode, when you want to take photos of the night could move into Nigh Scene, and so on. Scene selection is active if you set the mode to Manual.

Aqua Xperia M2 camera capabilities we suppose it is better than M2 Dual. In addition to still photos, the performance is noticeably better at moving image or video mode. Video recording taken at a maximum resolution, Full HD 1080p i.e. in this Aqua Xperia M2 also features SteadyShot which produces movement feels smoother video, or earthquakes. When this feature is enabled, the image frame will automatically cropped leaving a secure frame.

Running Android 4.4.2 KitKat, this phone has the same display photo album with air Xperia other KitKat. Indeed, in this phone also has two photo viewer application, namely Albums and Google Photos. In applications Album, pictures ordered by time taken. At the top of the visible cover slide show, while underneath is a list photo thumbnail view. Thumbnail size can be enlarged by pinching the screen alone.