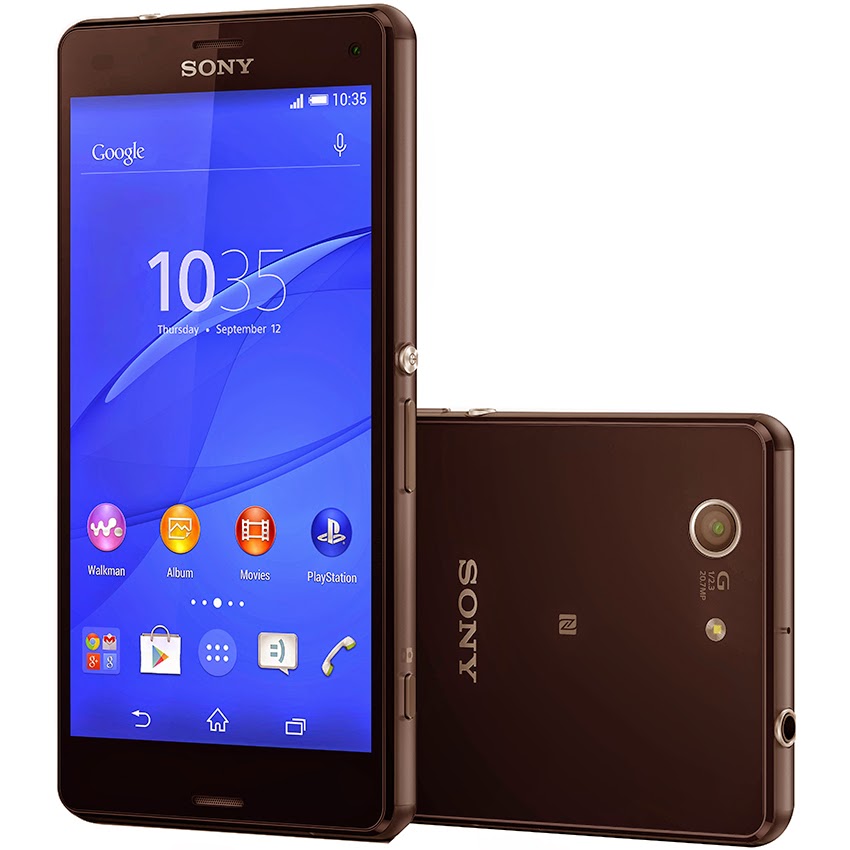 Sony Xperia Z3 Compact ready to amaze you with the quality of the screen is beyond your expectations. IPS screen of 4.6 inches which is surrounded by a thin frame makes the shape is not wide and comfortable grip. Technology HD resolution 720 x 1280 pixels combined with TRILUMINOS show the original color and produce rich colors such as red difficult to produce blue and green. X-Reality technology provides clearer images and live and for increasing the contrast and color. Now, more natural viewing experience and exceptional detail that you get on screen HD TV can also be found in the Sony Xperia Z3 Compact.

Sony Xperia Z3 Compact designed with premium quality material that is not only robust but also gives the impression of elegance. Aluminum frame makes this smartphone feels lighter. Body front and back coated with tempered glass which gives the impression of luxury. While flanks made of aluminum to make the appearance looks sweet and provide comfort when you are mobile even with just one hand.

Bagging international certificate IP65 and IP68, Sony Xperia Z3 Compact able to survive in the water to a depth of 1.5 meters for 30 minutes. However, it should be reminded that you should shut all the ports for micro USB, micro SIM slot and a memory card slot.

Capture all your precious moments with photos or high-quality video with stunning detail anywhere and anytime by using the Sony Xperia Z3 Compact. Sony’s latest smartphone is equipped with a sensor 1 / 2.3 “Exmor RS 20.7 MP resolution and BIONZ processing engine so that the phone can work together to provide photos and videos in sharp detail and vivid. Sony Xperia Z3 Compact is also equipped with a Sony G Lens 25mm which would make more objects on every shot with a wide angle and the latest. If you want to capture the sunset of the marvels of ISO 12800 is embedded pad Sony Xperia Z3 Compact will provide better detail, even in low lighting. not only take photos with better results, the Sony Xperia Z3 Compact is also equipped with technology SteadyShot with Active Mode Intelligent which will offset your movement, and analyze dozens of frames forward and backward to predict the next movement, so it becomes more smooth panning and the recorded images will be stable. Record your favorite moments as well with Full HD 2160p quality video @ 30fps on both the camera. Now, you will no longer lose your precious moments with awesome quality.

A Smartphone with Battery Life Up to 2 days

Sony Xperia Z3 Compact combines premium materials with the best technology from Sony, which will provide a better smartphone experience at every hour and every day. Latest smartphone from Sony this will allow you to do more than the previous smartphone without interference with a capacity of 2600 mAh battery that will drive power capability to give you long-lasting battery life of up to two days. Or, get more from your battery through Sony Stamina Battery Mode, which turn off the backlight when not in use to help conserve your battery power.

Sony Xperia Z3 Compact is a smartphone from Sony Mobile who have supported the LTE or 4G technology. Although in Indonesia do not support this network, the Sony has set up support LTE connection that operates at a frequency of 800MHz. You can still use the HSDPA network to surf the internet and stay connected at all times wherever you are. To complement your wireless activities, this smartphone is also equipped with Wi-Fi. NFC technology is also available which will allow you to connect the device and share it with more than 160 products capable One-Touch, such as a TV, headphones and Smartwear, as well as the latest SWR30 Talk SmartVand.